Saturday Feb. 9, 2019, 4:00 p.m.
This evening and through the rest of the month—about an hour after sunset, if it’s not cloudy where you are—I’d like to ask you to step outside and look for the brightest star you can find. Stand quietly, and listen for a faint and distant AAARRRrrrroooooooh, repeated over and over, circling that star. A one-note, baritone Coonhound bay. What it lacks in musical range it will make up for in enthusiasm and persistence.

The heavens will be brighter with the spirit of Amos Moses Coonbritches running loose there. My boy is free.

8:30 p.m.
So I went out, and it’s kinda overcast. A pretty, hazy crescent moon, but no stars. My thought: Amos has treed all the stars, thinking they’re raccoons. And I laughed out loud. 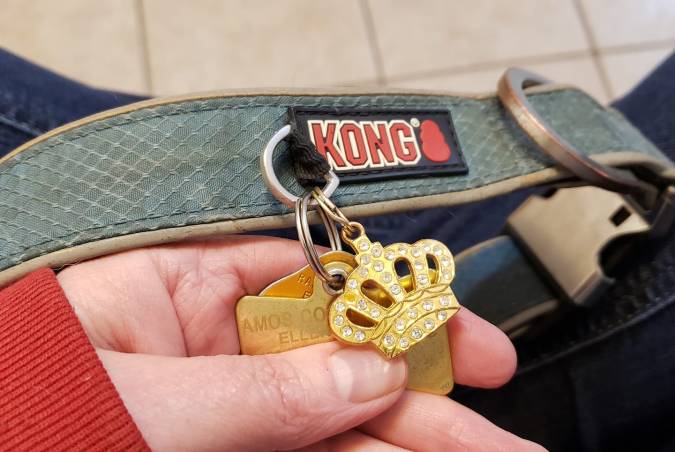 9:00 p.m.
I want to share with everyone who follows Athenspets – GA or any other animal shelter pages a more-than-special ACCAC alum who gained his wings Saturday, February 9, 2019.

Amos was brought into the shelter on March 10, 2014, by a good Samaritan who found him wandering around her neighborhood. I was at AC, in the front interaction pen loving on a pittie girl, when they arrived. My heart skipped a few beats when I saw him. He was impounded with the shelter name Amos. A BIG, LOUD, active, older (~8 years) hunt-trained Treeing Walker Coonhound, neutered and healthy-looking, but lost from his home and then not reclaimed. So after his 5-day hold ended, I took him home, at first as an adopt-to-foster. He never left me. We moved to S.C., and he had almost five years with me. He had a special bromance with my 84-year-old Dad. He ruled the roost and his three adopted/rescued smaller sisters. He survived a bout of kidney disease in 2015, and a Fall 2017 surgery and chemo for a malignant lung tumor.

Saturday, at 13, old-age infirmities that took his mobility, and a bunch of new cancerous, bleeding tumors in his spleen and liver carried him away from me physically, but he’ll be with me for the rest of my days. And after.

Special dogs find themselves at ACCAC every day, every week. They all deserve the kind of second chance Amos M. Coonbritches had. And I am so thankful for the ACOs, staff and volunteers who help them get those chances. Pics are from 18 March 2014, and 1 January 2019. 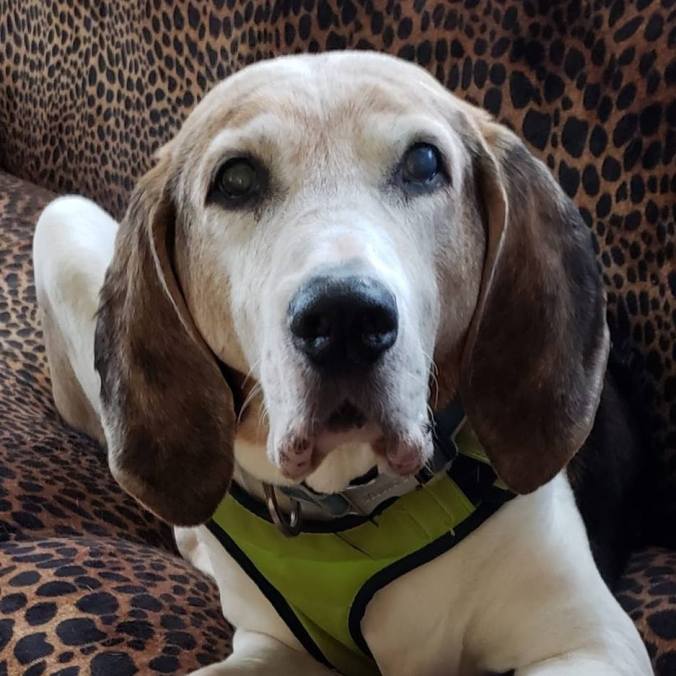 Thank you. Bless all who adopt, rescue, shelter, and educate. I’ve made a donation to the Athenspets Fund in Amos’s memory.

Sunday, Feb. 10, 2019, 8:00 a.m. Reflection.
After Amos’s cancer diagnosis and surgery in October 2017, I made a little vow to myself not to post any kind of daily drama diary of dog illness and the hardship illness brings. All of you who know love and loss know how that feels already. We all see our friends grieving and struggling, and other than prayer, there’s not a lot we can do to fix things. There’s more than enough pain in our news feeds.

So on Facebook, I stuck to the funny and sweet things, the things we all want to remember a year from now. I haven’t blogged this year; real life and mortal beings took precedence over essay-writing.

He had a really good, amazing year—a bonus of borrowed time thanks to surgery and chemo. He surpassed his prognosis by leaps and bounds. All of you who sent get-well cards to him and his granddad at the end of his chemo… that was one of the most loving gestures I have ever experienced. “Thank you” is not enough.

Since Christmas, he declined steadily and quickly. It was really, really tough, because in an ideal world I’d have stayed home with him all day, every day. I have to work to survive and provide for the Residents, so I couldn’t give him that. The last three weeks or so were especially hard for us—for Amos, for my dad, for me.

He dealt with progressing physical illness and weakness much like Dad does: he was angry about it. Some seniors are gentle souls in their last days. This boy was defiant, and often difficult. He was fully incontinent and fell down dozens of times a day. His food-guarding turned to food mania. He bullied his three smaller sisters. They cuddled him anyway. He tried to bite us when we were helping him up: how dare we look upon the king as helpless? My house reeks of urine and feces; I’ve hurt my back several times lifting his 90 pounds, as has my dad. I haven’t slept more than an hour at a time for six weeks. But we loved him anyway. Loved. Him. Through it all. Amos is so stubborn, willful, ornery, and coonhoundy that he kept hanging on. Until yesterday, when he couldn’t anymore.

When Dad said Amos collapsed in my parents’ kitchen and refused treats, I knew it was time. I went to see; I sat on the floor and lifted his head. He laid his head on my knee—he never does that—and closed his eyes. I knew. I DID want to know for sure why, and to give him a fighting chance if there was one. Amos has had a grossly enlarged spleen since I’ve had him—we discovered this on x-ray in 2015. My thought was that he had a splenic rupture.

Dad and I loaded Amos in my car and I took my boy to Fox Nest. A heroic vet tech picked up his 90-pound self and carried him inside. He was such a good boy while he was there, stoic as ever. He never let out a single whine or complaint the whole time yesterday. Following an ultrasound that revealed abdominal bleeding, Dr. Adri Casagrande helped me choose the option of emergency exploratory surgery and if possible, a splenectomy. We went with that, and unexpectedly discovered a bellyful of cancer. So letting him go free while he was still deeply anesthetized was the only right choice. God’s blessings to the three dogs that donated blood for Amos—a basset, a pit bull, a golden—and their humans who stepped up.

I have zero regrets about any of the care we gave him or the decisions we made for him over the past 16 months. We went many extra miles and dollars, and his team of vets and techs did even more. We had bonus time with this precious old man. Extra innings. Double overtime. And in this, we—Amos and I, and his grandparents, and all the friends I’ve shared Amos’s adventures with—we won. I didn’t know him as a pup, or in the first eight years of his life, but in the last five, we had each other’s hearts.

For the sake of learning, and with Dr. Adri’s approval after a thorough discussion, she’s sending off tumor tissue for biopsy. Or necropsy. Whatever you call it when the patient’s future is no longer at stake. This is not about closure, but about science. Everything about Amos’ primary pulmonary carcinoma in 2017, his aggressive chemo, his handling that chemo like a champion, and the length of his remission defied the odds. It feels important to discover if the cancer in his spleen and liver were metastases, or primary tumors from some other cause. We’ll share the results with the oncology specialists at Upstate. If this matters, I’ve a directive to donate my own body to a medical college for students to learn on, when I leave it. That Amos. He has something to teach. He has been teaching me since I brought him home in mid-March 2014.

And then his ashes will come home. His huge presence, joie de vivre, and resilience will always be here.

Far more than grief, I feel gratitude. No matter how hard things get, no matter how painful the goodbye even when you know it’s coming, it is a BLESSING to be allowed the love of a dog. It makes me a better person. And God knows I need all the help I can get with that.

Previous posts about Amos:
A positive moment
Out with the old; in with the unknown

About pet rescue and loss and healing:
Continuity
Adding Patches to the Quilt
The foster – the bridge
Heart animals and angels flying too close to the ground

The eternal soul is just that.

The road less traveled means
dirt on your shoes. 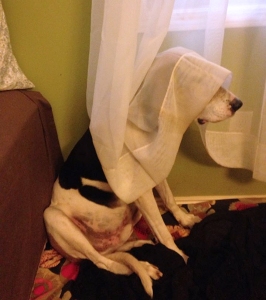